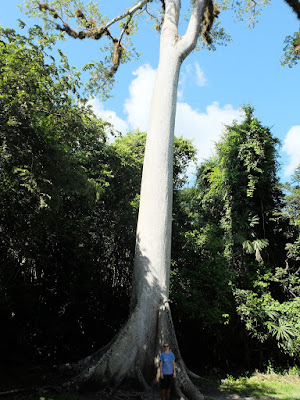 As we leave I support her as much as allowed.  We pause for a photo opt at large tree near the entrance that is now a people free tree .  We go back to the main area, near the area where the tour van is picking us up in an hour.  My current plan of action is to find some ice for her ankle, maybe have something to eat to distract us and wait it out.

The poison of the jaguar is setting in.

Nicole exposes the other leg, not the leg where initial pain was felt, and holy hell!  No seriously, holy hell!  The mysteries of the jaguar will never cease.  Her calf has doubled in size and all of it on the shin bone.  By the power of greyskull, it is not natural.  I am convinced the cat has bit and snapped both of her lower leg bones in half, but how did she walk out of the park if that is the case?

Obviously she feels the same way and tells me to fix it.  Well that is her first mistake.  I have no idea.  I wasn't there for the epic battle between light and dark, between twilight and dusk, where the jaguar lives.  I only saw a gleam of the cat as it solidly thrust my wife to the ground after she wittingly twisted it's dewclaw - I presume.   I had got us this far.  We are in the restaurant next to the pick up point.  I figure I can get some ice for the leg, I know it looks bad, but she just walked out of the jungle and even posed for pictures in bad sort of way, and maybe some food could distract us for an hour. In other words I am sticking with my original plan despite the new visitor resting underneath Nicole's tights in her shin.

Next, I ask what I think is sensible: "You are the nurse, what would to do if you were your patient?" I immediately realize this is no where close to sensible.

After an unfruitful search for ice, I leave her again searching for first aide.  Right around the corner is the information center which I hit up.

Lets step back a bit. Guatemala, Spanish, American, English; I piece my words together: "Doctora, mi esposoa, pierna, fractura."  I hear: "No No doctora, es domingo, auxiliar de infermeria."  I follow the information booth man to the first aide hut.  The information guy explains the situation to the nursing assistant.  Half way through the explanation the nursing assistant looks up from his book and sort of shrugs.  This is when I know Nicole, not in shock mode, knows way more than this guy.

I am sweating and super grateful that either of these guys are even listening to me.  The token Sunday staff nursing assistant grabs a roll of bandage and follows me.  The information booth fella waves and wishes me, maybe us, good luck.  I lead the nursing assistant to Nicole.  She is there leg elevated on a stool, still without ice.  Assistant is there with his wrap, and Nicole raised her skirt to expose her shin and the assistant visibly shirks away and says "No no Solo soy us asistente de enfermería No puedo ayudarte".  Honestly that means nothing to me, but Nicole's reaction is a sure sign to me that I have not found an answer.

I thank the nursing assistant and Nicole, despite the pure jaguar venom running through her veins and the sheer terror, also thanked the man as he walked away carrying his unused bandage.

So where does that leave us?  Thirty minutes before the tour goes back.  Nicole reeling from fighting off the Mayan curse as a casual passerby, and me trying to mediate.  O.K. no ice to be found, no first aide, what is the next step?

Back to the information booth - they are familiar with my case.  I approach the man and he is slightly perplexed asking me what I am asking for.  I clearly state "fastest way to the hospital"… well in my Spanish, "Yo lo neccestio hospital ahora". I think that worked.

We walk out to the parking lot together.  Information booth man taps on the driver side window of a taxi.  The taxi driver stirs, cigarette half lit and the other half burnt falling into his chest.  The info guy and taxi driver speak words. The newly waken guy starts talking money. This part I understand.  The assistant talks some more, the number from the newly awaken guy doesn't change, I say "Vamonos!" as I jump into the cigarette burned back seat, seat belt barren car.

We pull out of the parking lot where our man was sleeping next to the restaurant and I jump out.  I rush and and explain the current plan of action to Nicole.  Fighting the jaguar blood she agrees.  She topples into the front seat and rests the injured leg on the dashboard and I glue myself into the backseat.  We are off.

The trip is about 30 minutes.  The local Mayan cab driver recognizes the jaguar's curse.  It is a thing of myths.  He has never seen it himself, but he recognizes it from his ancestors stories. He knows it's dire and also knows the jaguar/snake venom mixture of lore should not be shaken.

We power through the jungle, the controlled jungle, where speed limits are posted and generally heeded.  Once out of the park the cab roars through villages.  I notice an extra engine belt in the back window and a bottle of oil in the console.  Some villages have speed bumps, where we come to an almost complete stop.  One time I am opening the car door to offer a push over the bump.  No, not necessary, he is just being considerate of the poison that is the papaya on Nicole's shin.  He understands.

Past the bumps, which he so considerably crosses, we are full throttle again.  The transition is worst than just hitting the bump.

After about 30 minutes of intermittent hump bumps we veer into Flores' emergency room.

Unlike the cab driver, the Accident and Emergency (A&E) folks don't appreciate the gravity of a tussle with a jaguar; maybe it is the city folk attitude, maybe it is the Sunday afternoon quality of staff.  Nicole hobbles into a bed, and we attempt to relay the events in our Spanish.

If anyone has traveled abroad in a foreign speaking country you quickly realize there are 'levels' to language.  Ask directions, order from a menu, navigate a grocery story, cash traveller cheques at a bank, all increasing in capability.  Toward the top of the lingual pyramid is talking to the police and hospital staff.  Personally, I am still in the grocery store. Nicole is well above that, but no where near the hospital zenith.

As often is the case, the words do not convey the situation, but the papaya growing on top of Nicole's tibia says more than any words we cobble together.  They see but still are surprisingly non-plussed.  They start making calls to get the right technicians around to take some pictures, but the majority of the people stay fixated on their phones.  It isn't until I mentioned 'hielo' that icing the bump is a consideration.  I mean really, I have burned into my head from age 16, Ice, Compression, Elevation, Rest, and Stretch (ICERS) as immediate first aid starting with ICE.  At any rate an insta-ice bag shows up and we begin icing the papaya while waiting.

We wait for a bit until the X-Ray technician arrives responding to the on-call request.  Minutes later, X-Rays are taken and a doctor is in-house and diagnosis provided.

Despite the epic celestial battle on the timeless battlefield, there were no jaguar teeth punctures, no claw scratches, and no fractures.  What is left is the papaya sized hematoma.  The prescription is Ice, Compression, Elevation, Rest, and Stretch and Advil at regular intervals. 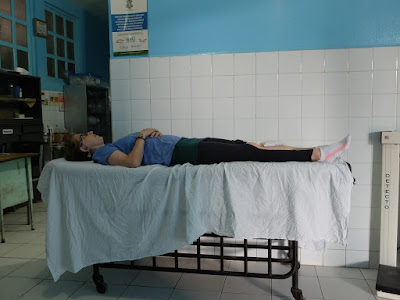 We wait for the taxi as the instant ice bag warms up.

I check with the clerk regarding our taxi and I am assured it is arranged and now given a 15 minute estimate.

Now that the instant ice bag is room temperature, I check in on the taxi only to receive the same response.

Loosing hope I confer with Nicole to discuss a less appealing option.  Outside I had been staring at a couple of three wheeled red tuc tucs. I tell the hospital staff not to bother with the taxi, and we gingerly load into a tuc-tuc.  The red three wheeler only fits the driver and two others through a small side door.  My concern beyond the in and out procedure is the comfort of the ride.

Surprisingly the ride isn't the the worst feared despite the cobblestone roads.  We arrive and it is clear we were not leaving in the morning.  I request ice and extend the stay.