Given a long time friend and follower of the blog has asked I feel I must respond to the question regarding the Super Bowl.  Bear with me as I take a winding road to answer the question.

I am an average American.  Nothing in my upbringing makes me special, I was exposed to the same thing as everyone else I know in my country.  There is a bowl, you do your duty and the flip the lever.

The first time I realized that not all the rules are the same was at my maternal grandparents house.  The upstairs toilet clogged after a visit.  I was alone, as I had been many times before, but never ran into the bowl not flushing the trophy away.  I was perplexed.  My mother patiently explained to me that the house grandpa's dad built was built before plumbing.  Since then, grandpa engineered a bathtub, and toilet on both the first and second floor of the farmhouse and when he did he was one of the first.  That jogged my memory to my father talking about the pre-plumbing, outhouse days, and how the Sears catalog was a pleasant break from the corn cobs.  As such the pipes used at the time could not deal with loads of toilet paper as we knew it in the 80's.  That was my first experience with an alternative bowl.

Life moves on, flash forward to one of the forays into Europe, I was faced with a normal bowl, but the paper was more suited to my grandfather's plumbing.  On the farm it was a self-discipline to avoid the shame of a the clogged bowl, but when necessity required one could fudge the deal and drop a couple of extra squares.  Not in the first stalls found in Scotland.  I was afforded plies half the size of a Kleenex tissue and not in roll form.  I adjusted and moved on, and it must be said the bowl was not at issue.

Central America is a game changer.  It amped up grandpa's farm scenario.    Most places had written pleas not to place anything other than that which came out of your body into the bowl.  When I first lived there I didn't really notice until a story I won't relate here happened (you know who you are).  But in my last round of treks through Central America the theme was to frequent not to notice.  I won't spell it out, but if a country or several countries are taught not to place anything in the bowl beyond what comes out of your body, you can guess where it goes.  The experience is not something to look forward to but something that is endured.

Now for the flash forward before I go to the flashback.   As for Malaysia, and more pointed Muslim countries, as I understand it, I am still not attuned to what is going on.  I looked into it a bit and was left more stymied than when I started.  Maybe I have grossly applied my mother's guidance regarding the plumbing history of a specific house to, without question, all of Central America, but I am at a loss in Malaysia.

Many of the toilets are tile from floor to ceiling and everything in the bathroom can be sprayed down.  On the surface it seems like a good idea to me.  Actually, I have often wondered how to solve my "I hate cleaning the bathroom" problem.  Every time I think about it, I come up with this ideal floor to ceiling, and usually including the ceiling, tile solution.  Make it so everything can be sprayed.  Easy daily cleaning.  My version is the press of a button walk away and presto the bathroom is clean. I never thought of the drying problem until this last week.

All the toilets in the county are wet.  The seats, the floors the walls, all of it wet (which really sucks as I still haven't replaced the Crocs I bought ten years ago and currently stroll around with a hole in my left sole).  Not what I expected, but it started as soon as I got off the plane in the Kuala Lumpur: Wet.  In the airport at least some of the stalls had seats and toilet paper and of course the latex hose - What the hell is that for?   A bidet?  I don't know but I am not touching it.  It looks like the type of hose Buffalo Bill in Silence of the Lambs was referring to when he said "It rubs the lotion on the skin, or it gets the rubber hose again"  Enough trips to the loo and I had to drop a Goog on what was going on: http://www.myreligionislam.com/detail.asp?Aid=6096

Best as I can tell, the purpose is explained by ninth bullet: "One should remove feces on one's anus with one's finger and wash one's hand.  If there is still traces of filth, one should wash them with water."

So that explains the lack of paper - nothing to do with grandpa's farm issues.  So the latex hose is used to wash one's hand, and it is only one's one hand because it is very prescriptive on which hand to use and presumably which one to do everything else - no I am not being snarky, it is a thing, I get it.

Now let's put this in practice.   You wipe your anus with one hand, and then turn on the water with the other, grab the tussling latex hose and wash the dirty hand using using the hose, if not clean, rinse and repeat.  So now you have a fully tiled washroom, a latex hose attached to a spigot and water and feces everywhere.  Maybe if everyone knows the rules this works.  At an international airport?  Just saying we have some hygiene issues on our hands (and on my well worn Crocs).

Note, I only pick one rule as it is germane to the Super Bowl.  I strongly encourage you to investigate for yourself as I am no scholar.  I am just passing through trying to understand where I am.

Flashback time — The Super Bowl?  Well for me they are all over Japan.  At first glance nothing out of the ordinary;  Do your thing, paper next to you, and tap the leaver - done and done.

Anyone can leave it at that, but can you really?  To your side is a control panel full of buttons and strange Kange characters accompanied by diagrams meant to be self explanatory but woefully not.

Once again, time to drop a Goog.  Come to find out they have solved grandpa's farm issue not only once, but twice.  The first solution, is what most of America and many countries did: Build the plumbing to match the waist products once all the factors are known.  I mean really how could grandpa know what toilet paper would eventually become.  But the really ingenious and hence why, in my book, Japan owns the Super Bowl is they did away with all of it using buttons.

You can literally take care of your worst nightmare in the toilet by hitting a series of buttons.  Do your do, wash, dry and walk away by touching some buttons and cinching up your trousers.  There are even male and female specific buttons.  Paper isn't required, even though supplied.  I am not talking just in posh hotels (I stayed at a pretty basic hotel). I am talking bars, restaurants, everywhere.  The only time I found a bowl without buttons was in a park.

As a side note, I find it a cruel irony, or maybe it is causal, that in many places in Central America you cannot even flush toilet paper down the toilet yet they are well know for Montezuma's revenge, gringo gallup, aztec trot etc.  However, in Japan they have the most sophisticated toilets in the world and I am not aware of anything like the "Shogun Shits" or the "Samurai Softies".

To go from what I consider normal, to yeah that sucks but I get infrastructure issues, to what is going on in Malaysia, to Japan?  There is only one Super Bowl.

I will be catching a cab at 6:30 a.m. to the only bar showing the event and enjoying a light breakfast followed by the Super Bowl: Falcons 47 - Patriots 42.

I would have more toilet pictures up but the internet here is slow, very slow. 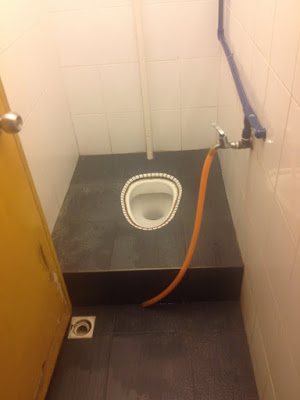