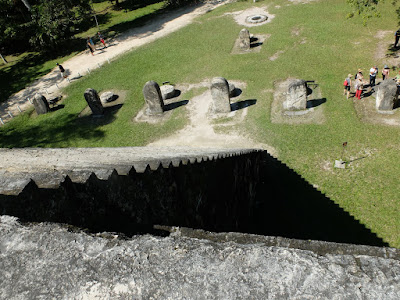 We follow the guide with the tour group through Tikal.  Unlike Chichén Itzá we have multiple opportunities to climb some of the five excavated pyramids and many other structures.  The first thing I notice on the first pyramid is the rise over run ratio of the steps.  These things are steep.  One subconsciously notices on the way up but it is in your face on the way down - take care not to be on your face on the way down. 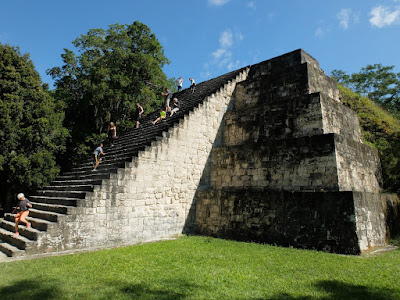 Being a fan of sand dunes for the mere pleasure of jumping off them and flying world breaking long jumping distances I immediately think, 'I could totally make it to the bottom in one running leap'.  Of course the prohibiting factor for such an action is the stone versus sand landing pit.  I walk down the first pyramid, but many other people were actually sitting and shimmying down the steps due to the incline.  It is intimidating.

The tour ends at pyramid IV at which point the guide gives us a meeting point and time for the return to Flores.  Until then we are free to wonder about the grounds.  As such we wonder.  Again, unlike Chichén Itzá there are many ruins and many that are free and open to climb, pose for pictures, revel in the casted shade whatever, just a free and open playground with no adult supervision. 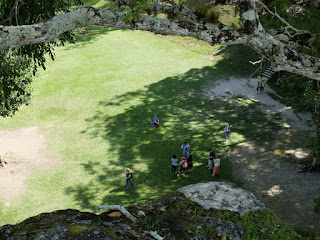 I summit yet another pyramid while Nicole lies in the shade like a lamb enjoying the summer weather.  I wave eagerly down to the ant sized Nicole, take some snaps and skip back to her.  When I arrive she was happily resting (no longer ant shape sized, because that would be weird) but willing to explorer on.  We traipse up the common square poking our heads into dead ends, and wrapping around unmarked areas with little hesitation.  It is hot.  It is really hot. 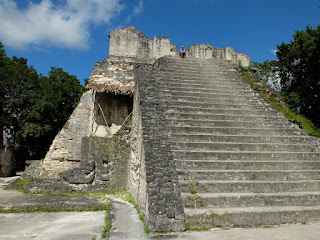 We march on up and down stairs.  Sometimes I am in front exploring my own adventure and other times she is calling me her way to what she sees. Sometimes she is ahead of me doing Rocky type moves at the top of stairs or other times just looking exhausted and cute.  I run up to meet her and rest and then we wonder around and down.

Heavy footed, I am tromping down the last flight only to hear a skirmish.  Before my empty water bottle hit seven steps below me, I am up three stairs to the next flight to meet Nicole on the landing.  All in a split moment I see a jaguar leap off of Nicole's back to sun bleached stone and into the shadows but the damage of inertia is already set in motion.  I cannot attest to the battle that I did not see prior to me wimpily throwing that empty water bottle, but I can tell you the tumble I saw.  In all honesty, without the landing between stairs, the jaguar would have won today. 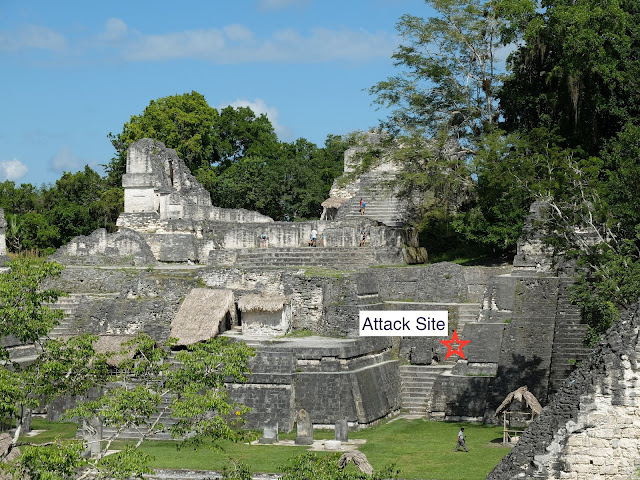 Things are what they are, I immediately throw my stinky sweat soaked hat on Nicole's face as the first thing I think I see on her face is heat exhaustion.  This is not the right answer. The hat stench is not helpful and the acute pain is in her leg.  I ask what happened and she spirals off into some story about a cat, a very big cat, (which she is very allergic to, all cats for that matter not just big cats) and if I had not seen it myself I would call her story out as false.  There was a jaguar in the clear light of day pouncing off her back as she tumbled the last three stairs.

Let's not beleaguer the big cat fact, we are never catching that cat.  Even if we did, I am pretty sure we would lose.   The fact is, we are here in the middle of the great civilization of Tikal, surrounded by hundreds of people and with a tour group yet somehow alone.

Nicole unzips one of her healed boots rubbing her ankle.   In relief, I am glad it is not lung puncturing claws in her back, nor a big ol' conk on her head that is the immediate pain.  It is her ankle.   We look at it and nothing seems obviously wrong.  After some negotiations she insists on walking out. 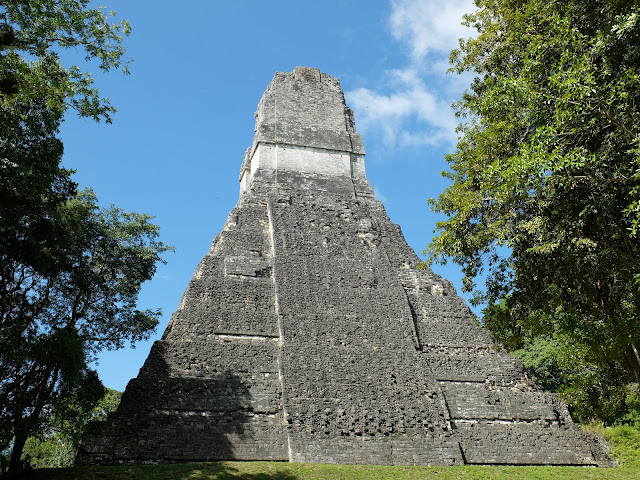