The Fall: Part One

After our extended in San Pedro stay we take the water taxi into Belize City.  All the Belizean's on San Pedro said "miss Belize City".  The rest of Belize is beautiful, but Belize City is something to avoid.  Given how the water taxi and bus schedule align we cannot avoid one night in Belize City.  We pick from a rather short list of accommodations.   The best feature is the proximity to the ferry drop off in the evening and the bus pick up in the morning.

After settling into the undecorated concrete cube and asking the hotel clerk to exterminate the ants in the room we hop-scotch across the patchwork of holes and concrete we would call a sidewalk, and the Brits call pavement, to investigate bus tickets.  It is reminiscent of Mexico City sidewalks, but slightly different.  Mexico City sidewalks mostly go up and down with an occasional and random hole. In Belize city about every fourth panel of concrete is missing dropping straight into the city drainage system or possibly the ocean.  It is not wise to 'walk and gawk' here.

We are back to the water taxi port and approached by several people at once asking if we need a taxi, a water taxi, or a bus ticket.  We randomly pick one of the offering parties and purchase two tickets to Flores, Guatemala and confirm the time and pick up location.  In our heads we purchased tickets on a scenic cruiser similar to what we rode in Mexico; air conditioning, movies, and an overall comfortable ride.

The next morning we arrive a bit early grab some breakfast and chat with the purveyor of bus tickets.  He assures us our bus will be here soon.  The 8 a.m. departure time came and went.  We are assured once again the bus is coming.  Eventually someone grabs our luggage and wheels it over to a van.  Initial concerns are registered by Nicole:  "They are going to put our luggage on top.  This isn't a bus, we have no idea who these people are.  We are going to be riding with chickens."  I am jolted also, but hey what are we to do at this point?  We have paid for the tickets, there is no bus in sight, and they are walking off with our luggage.  We are on our way.

The initial panic subsides once we get in a people mover van.  It has a maximum capacity of 14 or 15 and currently there are seven people in it.  All the luggage fits in the back and there is not one chicken on board.  On second evaluation, this may be an upgrade.  Plenty of room, air conditioning and a smaller group which should make crossing the border easier.

We move out of the bus terminal and rumble around Belize City for a couple of minutes  only to park at a near by parking lot.  The van driver gets out and comes back with a few more people.  O.K. the comfort level is going down.  We are leaving much later than expected.  We had hoped to be in Flores well before night and we have no idea if we are making any more stops and picking up more people or leaving anytime soon.  Ultimately we didn't make anymore stops, we are not overly crowded and have a nice international mix of companions: British, Serbians, Argentines, Brazilians and us - no one speaks.

The ride is fairly uneventful and beautiful.  As we leave Belize City passing cemeteries on the outskirts the views open up to lush mountains and country side. Much of it seemingly untouched with scattered houses of various opulence or lack there of.  The road is mostly smooth pavement, sometimes narrow, and rarely it breaks into stretches of dirt.

We started out late, the dirt roads are slowing us down even more, and then there is the border crossing.  The crossing seems more or less like complete chaos.  We are all escorted out of the van and immediately offered currency exchange by men holding giant wads of colorful cash.  I know it isn't going to be the best exchange rate, but I have a fistful of Belizean money that is worthless in Guatemala so I take the hit and exchange whatever I have in my pocket.

Next is the Belizean exit gate where they charge some sort of eco tax.  Once through that line we are confused as to how to get a stamp into Guatemala.  A little boy is attempting to help us to the next port.  At first, I try to ignore the child as there is a mob of them accosting everyone as we wandered around.  Eventually we find the next line and the child is standing right there smiling as if to say "I was trying to help".

Once we get our stamp he is still standing there smiling. It makes me laugh.  I give him a few quetzal for his assistance and understanding of the overly cautious Americans. Our van is on the Guatemalan side of the border waiting for us.  Nothing doing with our luggage, it never left the van.  We all piled back into the people mover and we are off.  Again, I think the smaller vehicle probably made the border crossing more expeditious. 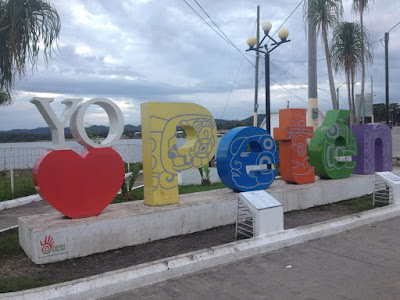 We roll into the edge of a city during the daylight.  The driver stops on a corner and says, "If you need to get cash, there are ATM's inside the grocery store across the street." Everyone is a bit confused as no one asked for an ATM.  The driver and his companion see the perplexed faces and eventually explain that we are in Flores and asks everyone where they are staying.  Some are just around the corner and opt to call it the end of the trip, others, like us, are on the island.  The driver asserts that most places on the island do not take credit card and there is a severe lack of ATM's on the island, so if you are staying on the island this is the time to get some cash.  I get some cash. 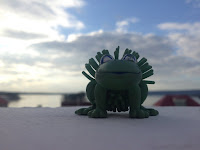 We are off, and within minutes we are on Isle de Flores in front of a travel shop.  It is made abundantly clear that if we need any tours this is the place to go and then pointed in our respective directions.  One of the gentlemen from the tour shop offers to walk us to our hotel.  As the guide from the tourist shop leaves us he leaves his card with me just in case we need a tour. We easily find our accommodations and they are very nice.

The outside of the building is well presented, with colored and pressed concrete sidewalks, the exterior walls are painted with a large floral design.  Hotel Isla de Flores is top notch and the transition from Belize to Guatemala is a success.