We arrived late and waited an hour for a shuttle to our airport hotel, which would have been a 15 minute walk we discovered.  Despite the proximity the roads made the ride as long as the walk would have been.  If we knew the hotel was so close would we have done anything different?  Not sure.

Being relatively isolated Americans we have this perception that Mexico and Mexico City is full of murderers and we are inherently distrustful.  They even have a secret language called Español they use to communicate right in front of you.  It didn't help that once we were safely in our hotel room the info binder explained how to answer your hotel room door.

If someone knocks on your door, call down to the front desk, confirm someone should be at your door and then open the door.  I mean, it seems like a common sense…, sort of. At the same time, when have you ever thought of calling someone else to answer your door?  The fear factor was not soothed after such explicate instructions.  Anyway it was for only one night.  We picked a hotel close to the airport knowing we would be getting in late.  Tomorrow we had other accommodations so we rested.

The next morning we enjoyed a fairly standard hotel breakfast while watching the morning show on the television.  Everyone was dressed in Day of the Dead garb and makeup while talking a million syllables a second.  While in my morning daze at the television, Nicole was actively communicating with our new best friend and coordinated a ride.

We were lucky, the stars had aligned somehow.  Our friend gave us Andrés' contact information and we caught Andrés in Mexico City, with a car and in the mood to drive a car.  Three things that don't often happen to someone we have yet to meet.  We had a ride.  We were looking for a man in a pink shirt driving a green Jeep.  Even as I write this it doesn't make sense but it happened.

Andrés is a friend of my best friend's novia attached to us by a single email saying;  You guys seem like you might be kindred spirits in your deep appreciation of laid back fun, so...if the timing works out...why don't you...hang out!!

With that, and Nicole's mad WhatsApp skills, Andres was picking us up near the airport and driving us on into Mexico City.  It so happens that our next domicile was really near Andres' Mexico City flat with his girlfriend Anna.  We were neighbors.  And as I said before Andres was in Mexico City for work, which doesn't happen often, Anna had just bought a Jeep, and the rare occasion had it, Andres felt like driving.  Stars are aligned.

We checked into our hotel and then spent the rest of the day with Andrés.  He showed us around the Roma district where we were staying and he lived. Walking, talking, taking in the sites, some "laid back fun" as one would say, a lunch, where we met Anna and then some some coffee in the rain - serious rain.   Andrés was the best guide ever and best new friend ever.

The colors of the city stand out agains the pavement, concrete and dust.  Artists paint, taggers tag and the colors of the dead stand out.  Paint, flowers, makeup, clothes and sound against a constantly changing and churning backdrop.  The streets, roads and parks are tore up everywhere (constantly from what I am told).   Why?  never got a straight answer but would guess it is a combination of things from the earth is literally moving all the time (signs everywhere telling you what to do in an earthquake - never saw the in LA, San Fran or Seattle), the trees have surface level roots ripping up sidewalks (who would have guessed) or just keeping people employed (no idea why the park in front of us was being removed brick by brick).  All the while captive murals everywhere with sinkholes in the middle of the sidewalks.  If you were lucky they had branches in them to prevent you from falling in if you didn't trip before and impale yourself.  Cruel juxtaposition given the art that draws ones attention up.  This place is amazing for ones eyes and soul.

Speaking of souls, one stands out in recent Mexican history.  If you are going to Mexico City go to Frida Chalo's house.  Such an atypical and hard life.  The people she knew, loved and despised all on display.  It seems to be a modern love story without the movie sugar.  She hated Diego for all his affairs, all the time maintaining her own, They marry, they divorce, they remarry. The whole relationship between them is the hardest to understand in comparison to their other relationships.  The had two aligned individual passions: Mexico and Socialism.

To see where she was born, suffer childhood illness, endure adulthood injury that crushed her back for life, loved, co-habituated and died makes the whole thing very personal.  It was Frida's father's house, Diego bought it when her father could not keep it and Diego dedicated it as a museum to her life after she passed.  While tortured they loved, and the actions bear this out until the end.

What would Frida think of the museum?  What would she think of her face selling t-shirts and magnets to tourists. Maybe she would hate it as it flies in the face of one of her first loves: Socialism.  Maybe she would love it because it really does promote her other love: Mexico.  Diego thought is was the right thing and who would know better than him.  I trust them both.

Lots more to say about Mexico City, but I just don't have the words.  The pictures capture a small glance.  What can I say Mexico City is a World city and like every World city and has its own slant on the world skewed by location and time.  The contrasts, the color, and the people will not be captured with words or pictures.  Some day I do hope to live it more fully. 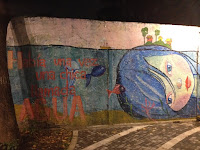 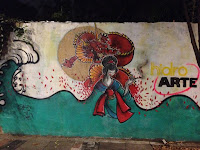 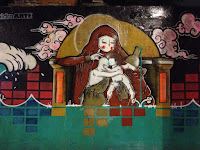 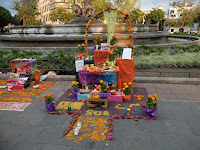 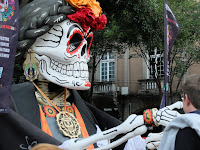 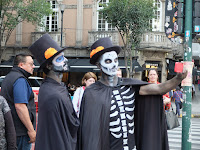 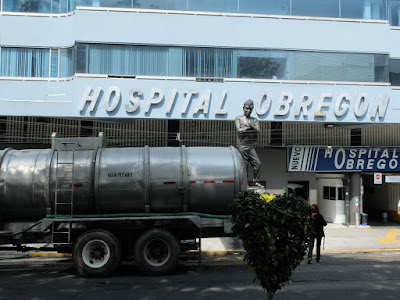 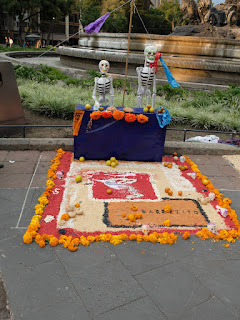 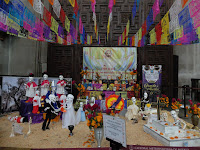 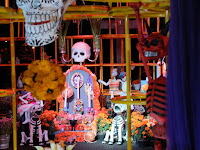 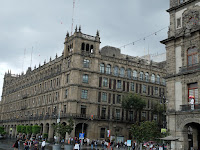 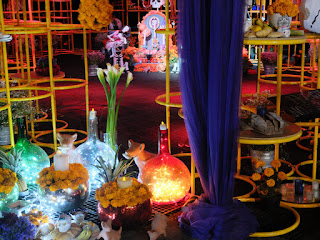 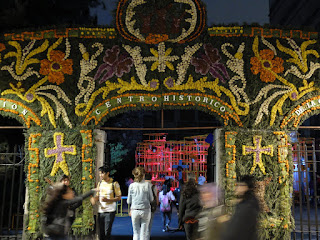 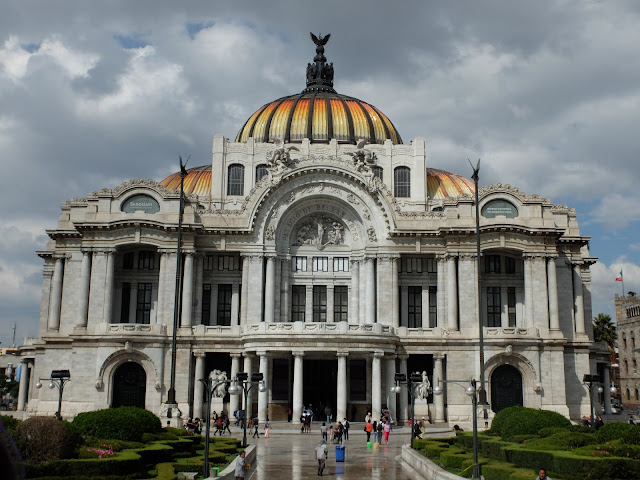 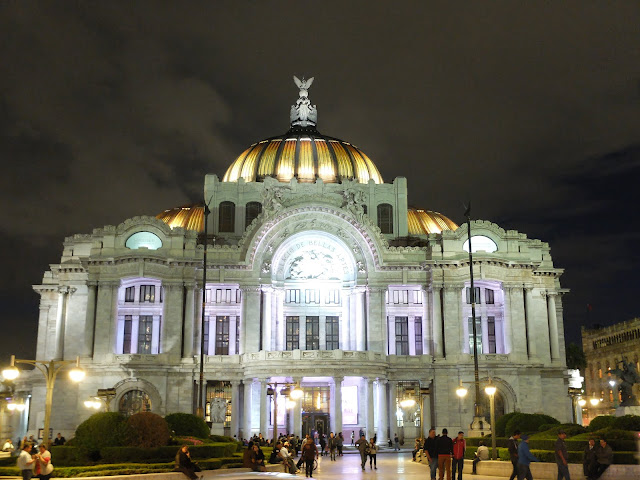 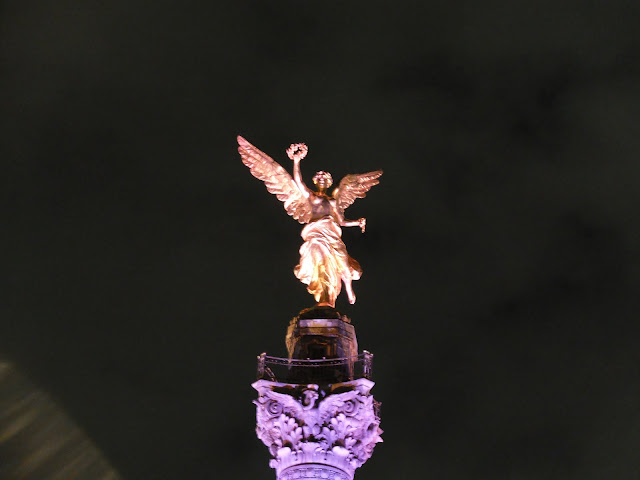 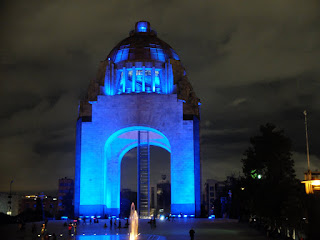 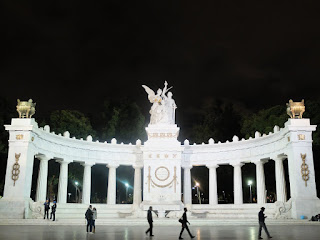 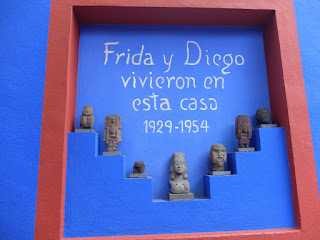 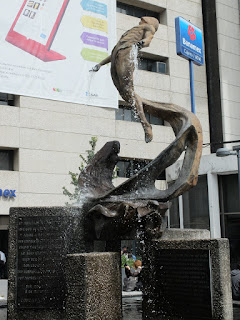 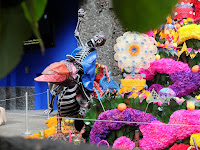 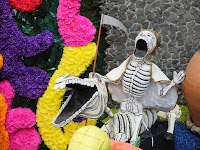 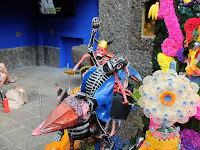 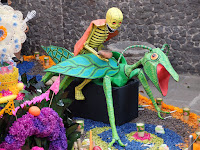 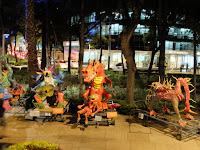 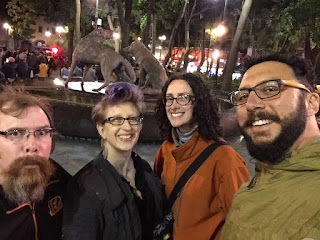 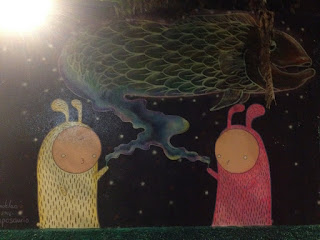 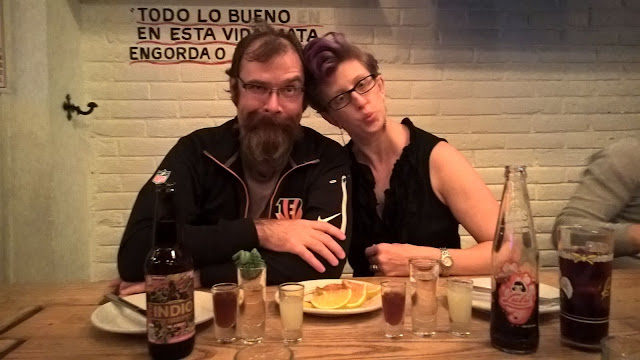