We have nothing planned today other than Anthony has to work and we have to drop him off.  None of us are doing well.  I am not sure how Anthony is going to make it through his day of responsibilities.  Our heads require sunglasses and the uber-tint on Rob's rental is more than welcome.  We load up into the car, Dax takes the passenger seat as the local navigator and size considerations matching comfort, and Anthony and I are in the back.  We drive down the steep and one 180 degree turn driveway out to the main road.  We are angled at about 30 degrees obscuring any sort of line of sight for the driver.  Dax, repeating "no", "no", "no", until the coast is clear and "go" when it is clear. We are off.

As we drive I am amazed Rob can function at all.  Then watching the roads and the other drivers I am more amazed that he is willing to drive here under any circumstances.  The rules of the road are understood differently here.  We make our way into Santa Ana with Dax pointing and leading our way from the passenger seat.  We pull into a roundabout at which point Dax directs us to stop on the side.  We are in the middle of the roundabout when Anthony jumps out and bids his farewells.  I am not sure I am processing any of this correctly.

As we drive Rob and Dax are talking about the safety of the area and dropping one liners that instill a background fear in Rob and I.  We see a pick-up truck with a simple one bar steel cage stilted above the bed holding in five or six machine gun toting, green clad, black ski mask wearing standing passengers.  The masks draw my eyes to theirs as they round the about.  The car is silent.  For some reason that either doesn't need any explanation or there isn't one to be had.

We stop at a petrol station to pick up tonights rations of cigarettes, water, and beer.  The door to the convenience store is opened by the free hand of a uniformed shotgun toting door attendant.  There are guns everywhere here.  I mean everywhere.  There are several different uniforms accompanying the guns and as many different types firearms brandying about.  Apparently security is a top concern here in El Salvador. Whose or what's security is unknown but it is a top concern.  I don't know what the U.S. State Department is going on about.  How can anything possibly go wrong in this country with the sheer volume of firearms.  No one would dare do anything illegal here because everyone has a gun.  At least that is my understanding of the Second Amendment rights advocates if taken to the logical conclusion:  Give everyone a gun and nothing can wrong.

We move along up the road to some ruins near Santa Ana and park.  Again, Rob with his awareness heightening comments prods us to either gather everything up or hide them somewhere within the car.   Dax the local, doesn't say anything to soften the ominous statements and compiles or agrees with every statement.

We get out and head into the ruins of El Tazumal in Chalchuapa.  Smaller than anything I have seen yet but still just another testament to how large and pervasive early American civilizations were. This one is completely open to climb and we do as much as the mid-day's heat and the late night hang over will permit.  We pose for a few pictures meander through the small attached museum.  Look at the cemetery next to the ruins.

Rob asks the local sitting at the gate who was buried there.  The response is "Warriors".  Rob asks if the winner of the games or the losers of the game were killed and buried here.  The answer is "Both".  Sometimes I feel people just make things up when they don't know the answer.

We move back into town and decide to hit up the mall.  Dax has to deal with some mobile plan issues, Rob is looking for some cheap clothes and I am tagging along.  Again, guys with guns, on bikes, on foot and in cars.  The trip is short, we eat in the food court, some uninspired fried chicken, and we are back to the Villa for some rest that will hopefully clear the remaining clouds from last night.

The rest is welcome, and the blazing mid-day heat is giving way to an evening cooling trend.  Tonight is Maria's youngest son's ninth birthday.  As such there is a fiesta at the pool next to our accustomed tables.  There are children and parents everywhere.  Along with the children at the party there are a couple sitting with us.  Some of Dax's nephews and a friend, Enrico, who is ostensibly 21, but I cannot see him being a day over 16.  Kids everywhere. Cesar offers up free pizza to the table, Rob has his own stereo piping in music from the inter webs and like last night everyone is playing DJ.

Rob and Dax intermittently sing along with the song, and I don't mean mumble through until the chorus, I mean sing with all force every single word.  It comes out Rob has a band back in Ottawa and loves to sing.  It occurs to me they are just waiting for the kids to clear out before heading to the function room where a full on Karaoke get up is set up.

As suspected, after we have many drinks the children pass on their well wishes and are escorted home by their parents.  The function room now only has a handful of people including Maria and the DJ.  Rob waists no time as soon as the DJ finishes holding over until there is another volunteer, Rob is up there.  It takes him just a few seconds to decide on a song and he nails it.  Rob is an entertainer and loves being on stage and has a great voice.  Not to be outdone, Dax is next on deck and like Rob, nails it.  Nothing held back.  The two go back and forth for a half a dozen songs, occasionally trying to prod me onto the stage.  I am having nothing of it.  I assume this is the typical Karaoke scenario where there is a finite list of songs in a three ring binder that one picks from.  I never find anything I am inspired to sing, and so far everything has been in Spanish.  I don't see how this could possibly happen.  I have mustered the courage to karaoke only one other time in my life.  I do not have the inherent showmanship that Rob and Dax are displaying nor the ear or voice.

The night goes on, the drinks flow, and eventually Dax has to get his nephews to sleep and Rob calls it a night.  I stay to finish my beer and Maria is now front and center.  She sings a song, an American song that I recognize and haven't heard forever: "Losing My Religion" by R.E.M..  Something comes over me.  There is an outside chance I may find something to sing.  I go up and sit next to Maria as she is finishing her song and I realize that all this is being driven by YouTube.  Just about every song on earth can be found on YouTube with words overlaid complete with bouncy ball and no one singing.  When did this happen?  This seems like a game changer in the world of karaoke.

Next thing I know I am singing "Sax and Violins" by the Talking Heads, "Vincent of Jersey" by Big Head Todd and the Monsters, "Soul to Squeeze" by Red Hot Chili Peppers.  Maria even forced me into the singing a six minute duet - "Bohemian Rhapsody" by Queen.  This is the most I have ever sung into a microphone ever in my entire life and other humans were actually in the room to witness it - all three of them - all three complete strangers.  Even more surprising they didn't leave immediately or at all for that matter.

What has happened?  What are these vicious captures doing to me?  What kind of mind games and torture am I being put through.  This is only the second night, how much more of this can I take before I am no longer myself?  How long before I am completely transformed by the El Salvadorian Syndrome. 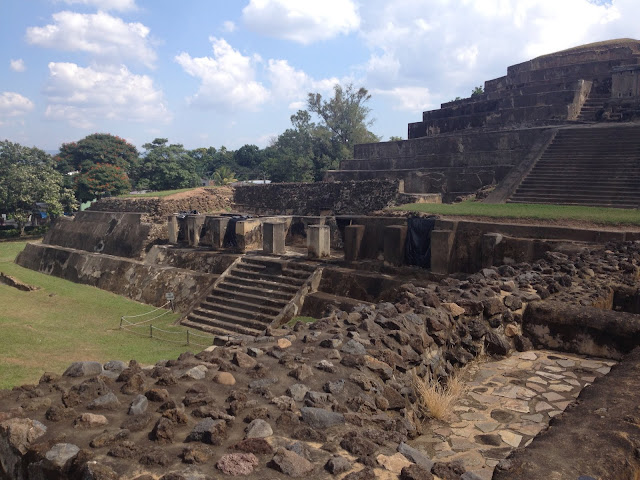 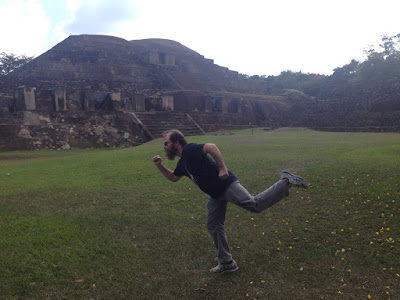 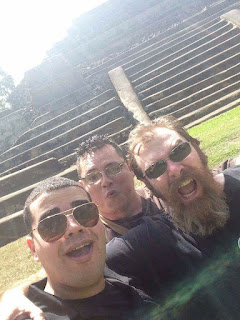 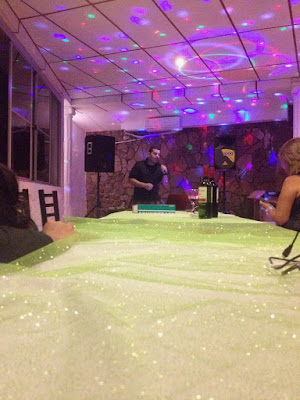 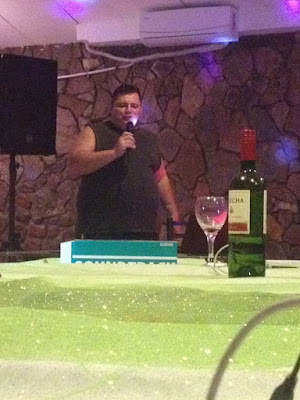 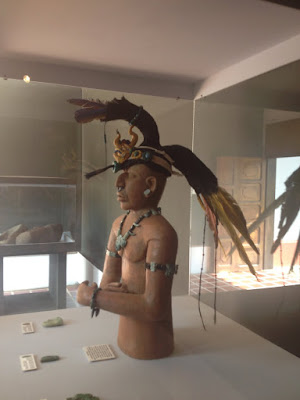 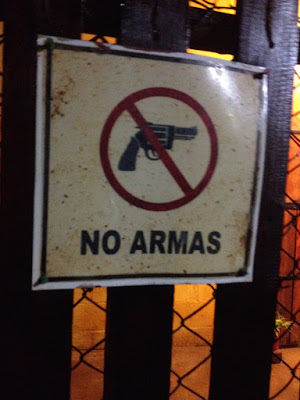 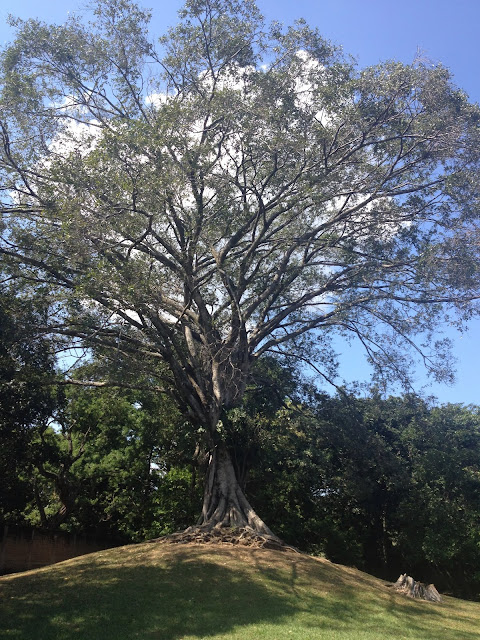