To protect all those involved the names in the following story are fictional and some or all of the events conveyed may or may not be complete fiction.

So I see Nicole off at the airport and I make it to the bus stop in Guatemala City.  A flood of emotions is coming over me, the strongest being fear and with it comes a realization; I am codependent.  For me, this is a shocking realization as I have always considered myself fiercely independent.  This is the first time in a long time that I have traveled alone in frightening lands.

The U.S. State Department travel advisory for El Salvador published 15-January-2015, starts out with: "The Department of State continues to warn U.S. citizens that crime and violence levels in El Salvador remain critically high, and U.S. citizens traveling to El Salvador should remain alert to their surroundings."  Then it continued with some softer words, "Tens of thousands of U.S. citizens safely visit El Salvador each year for study, tourism, cruise ship visits, business and volunteer work.  There is no information to suggest that U.S. citizens are specifically targeted by criminals; however, crime and violence are serious problems throughout the country."  The travel warning then goes into some current and historical crime stats, typical crimes; kidnappings, hostage situations with lack luster conviction rates and then goes into detail regarding places and situations to avoid, and specific examples of gang related actions.  It is a bleak outlook softened by the one statement about tens of thousands safely visiting.

I am legitimately on edge and going it alone makes me realize how much comfort I had with Nicole by my side and how much of that 'warm blanket' feeling I take for granted.  I realize how much I rely on her judgement to balance my own.

I resolve that this is an opportunity for growth and have plans to spent two nights in Santa Ana just outside of San Salvador.  Get there tonight, climb a volcano the next day, then move on.

After a nice tipico lunch at the Tica Bus stop everyone is boarding and I am in the back seat.  It smells a bit blue (if you have ever ridden a Greyhound bus you know what blue smells like), other than that this is the type of scenic cruiser I am hoping for.  I settle in for the four hour ride. Well I think it is only going to take four hours, five at most, and it ends up being six hours, one of which was at the border crossing.

We hit the border crossing at night and everyone is shuffled off the bus into the dark dirty street.  Like Guatemala, numerous people are holding large wads of colorful cash offering poor exchanges, just sitting around, or tending to smoldering coals releasing smoke into the stagnate night air as they offer up meals for money to the transitory.  Dogs shifting freely back and forth across the border between numerous machine gun armed guards.

I fall into line behind the rest of my fellow bus-itizens, and I am in the back of the line waiting my turn while trying to inconspicuously ignore the raggedly dressed man screaming from the El Salvadorian side of the border barn like structure. Once processing through one queue is complete we turn around and fall into the next queue directly behind the first.

The bus driver is on the other side waving those who have successfully cleared the queues back onto the bus.  I really hope he recognizes me.  I am no longer at the back of the line due to others flowing across the border, and I really hope he knows where his lines stops and the other starts.  A couple, two people in front of me, is having some issue beyond a language barrier.  The bus driver swoops in to intervene and the couple is escorted off with the bus driver out the long way of the barn.  Oh, I hope he comes back.  Next is a family of four and they are paying up their dues only to find they are two dollars short (yeah I know, odd right, dollars? - El Salvador's official currency is the US Dollar, I am sure glad I still have some of Norma Roses proceeds in my pocket).  After a minute of back and forth between the family patriarch and the border officer it is clear the rules are inexorable or at least the guard is intransigent.  I reach into my pocket and pass along the missing dollars.  The father thanks me and moves down the long end of the barn with his family.

Oh man, do I have enough now?  The sun-parched man continues to rage and is slowly but consciously stumbling toward me as I work out my entry into El Salvador.  The bus driver is no where to be seen.  The armed guards remain staring out into the distance right through the walls of the barn.  Is this how it ends?  I dig through my backpack and find the requisite dollars to get my stamp.  Rather than confronting the approaching screaming man to the right of me I turn back into the line and walk around to the other side to make a quick exit down the length of the concrete barn in full view of the machine guns and guards.  Luckily the bus is obviously situated just outside and the driver is opening the bus door as I exit the border control barn.  This isn't how it ends, but my nerves are on end and 'lucky' for me I still have at least an hour before Santa Ana.

I am dropped of somewhere on the edge of Santa Ana, conveniently right in front of a giant hole in the sidewalk. As I am about to step into the earth's crevice to grab my suitcase, I hear the bus driver scream and warn me.  I catch myself just in time to jump into traffic prompting the bus driver to scream again.  What the hell is wrong with me?  I collect my bag and start looking for a taxi.

I have a hotel lined up but never thought of lining up transportation from the bus stop to the hotel.  In retrospect I am sure it was possible, but I never thought through the steps and executed.  I see a rotund man wearing a collared polo with the iconic polo man covering his left chest leaning up against a nice Lexus lazily saying "Taxi".  I approach him and show him the hotel name and address, he nods in acknowledgement and we agree upon a fare.  Then we walk about 30 meters away from the Lexus into some run down, every window tinted, red beater of a car.  Eh what's in a car anyway?  Who needs a Lexus? Well except a cabbie trying to solicit riders at a late night bus stop.

I get into the back of the red car and the tint on the windows is clearly not intended for night.  It is impossible to see anything out of any window, except the windshield.  We burn out of the parking space kicking up rocks and dust to hit the road at a reasonable speed and start our 20 minute drive.  Twenty minutes go by and the city has come and gone.  The darkness is overwhelming between the sheer lack of light and the heavy window tint.  My nerves are getting the best of me.  What sort of discretion did I use before getting into this stranger's car?  None.

We pull off to the side of the road.  To the right I make out a steep hill.  To the left I can barely make out a small rubbish pile on fire at what looks like the entrance to a corrugated steel shanty town.  I see nothing that resembles a "Villa". So this is how it ends?  Am I going to get shot and that is it?  Am I getting kidnapped? 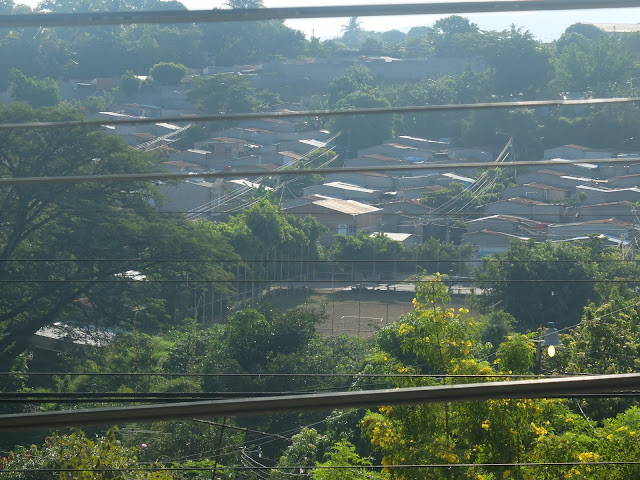