We survived our first tire blow out today somewhere in the middle of Mississippi.  More about that later because right now we are picking up the story from where we left off.  The following events happened from 4-September-2016 to 7-September-2016

We made it to the official 2016 host site for the International Day of Gluttony, Topeka, Kansas, Saturday night.  Caught up with my quarter brother and family while preparing meat. 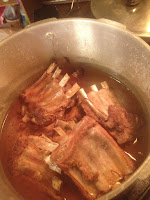 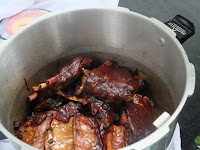 This year treats included ridiculous stakes, flank steak, pork ribs, wilted (translated as flashed pickled) lettuce in a sweet vinegar and bacon dressing, and for dessert; caramel and chocolate covered pork jowls on homemade bourbon ice cream.  The cooking tactics were wild and varied, most of it focused on drawing out the Maillard reaction, but I would say the most succinct synopsis of what I saw can be found as a LifeHacker.  I saw all those considerations taken on board and drizzled with wisdom. Jay takes that article from print to practical using propane torches* and pressure cookers. 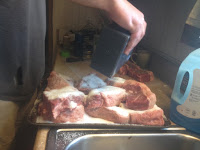 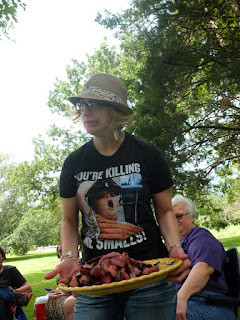 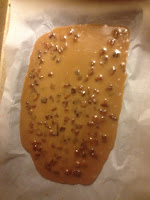 Many gluttons came, including one from as far as Portland, Oregon. 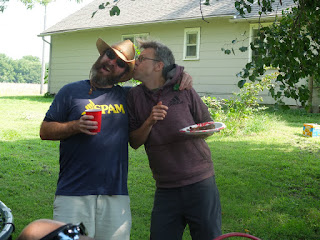 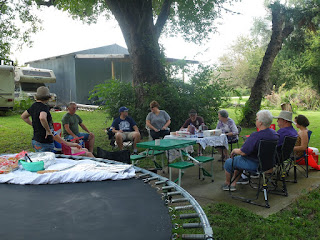 Long after everyone left and the leftovers were sealed, Nicole and I remained.  We got bogged down into this wonder funk that I can only describe as a meat hangover.  The heat was oppressive, and doing anything beyond the minimum required great scrutiny that tore all objectives into idol meanderings.  The day after the International Day of Gluttony, also known as Labor Day, Jay, myself and a bunch of other people had our NFL fantasy draft which set in motion a whole other series of events.  First it is was, "Let's continue the 'beginning of the NFL season celebration' by watching Any Given Sunday".  Next…, we were on a bing.

A week before I had never even heard of the ESPN series "30 for 30" and now and within a day or two I had seen many episodes: Small Potatoes: Who Killed the USFL, 85 Bears, Broke, Pony Exce$$, Elway to Marino, You Don't Know Bo.  Every episode is on Netflix.  Then we moved onto the Dallas Cowboys glory years.  We watched the stories about the "Great Wall" of Dallas and the bit about Jared Allen.  I would have suggested some Bengals tribute, but we still have yet to develop that legacy.  The meat hangover lasted three days requiring a gradual reduction of meat intake to minimize the meat tremors and terrors.

The last day we were almost travel ready and felt well enough to leave the house to watch my 1/4 niece Larissa in the Topeka production of Nunsense.  If you are in the area, it is a must, make it happen.  Opening night was 9-Sept-2016, we were the sole guests on Wednesday the 7th and it was spectacular.  Many thumbs up (no pictures as all electronic devices were off).

This concludes my research into the International Day of Gluttony. I have determined that this holiday is under-celebrated and should be much bigger.  I for one will be setting up a satellite celebration where ever I am next year.


* To be clear no meat was cooked using propane.  Propane was used to light the lump charcoal and get it to cooking temperatures really really fast.  Obviates the need for any sort of lighter fluid.
Posted by Marc at 7:37 PM