We return from Chichen Itza to spend a night in Merida at some bars meeting yet more new friends.  No friend referrals this time, just people we meet at La Negrita at first then onto some other bar open late including one American.  He was in the area to give some talks about solar panel defects and processes to find them and prevent them or something along those lines.  I don't know some smart person Ph.D. type talk that is way over my over my head even though he is obviously dumbing it down for the audience.  The night gets a bit blurry while we sit at the bar constantly checking fivethrityeight.com as the election results roll in.

As the results become clear, the bar closes down, my new American friend and I move onto a second bar and meet some more new people.  All locals and all working on their English, which goes without saying, is way better than my Spanish - that reminds me I need to email them…, be right back…, back.

The evening goes long, very long.  It doesn't help that I am well over two hours into trying to find our hotel and that is with Apple and Google maps pointing me in different directions and both wrong.  An old man is waiting for someone to wrap something up with nothing but time on his hands is very helpful;  too helpful one may say.  After a 30 minute conversation about things I didn't ask, he is going on and on about directions to the next day's destination: Celestun.  Again, why? I have no idea other than he has time on his hands.

I finally make it back and the hotel it is all locked up.  Nicole is reasonably fast asleep and not responding. I finally call the hotel to cobble enough Spanish together to get the front door open. Nick and Andy know what that sounds like first hand - it is a thing of oratory beauty.  I am in and all I am looking for is sleep.  I am sure glad we got that Mexican phone number before leaving Mexico City.  It proved invaluable and detrimental all in one evening.

Alas, who is this Montezuma fellow and why is he so angry?  A quick Goog' - drop attributes it to Moctezume II and this is his revenge for the conquering, slaughtering and enslaving of the Aztecs by the Spanish back in 16th century.  At 3 am his revenge is released on Nicole.  The "Gringo Gallop" and "Aztect Two-Step" do not embody what Nicole is experiencing this evening, it is punitive.

After a long night and late check out we are done with our mainland explorations for the time being.  It has been at least a week since we have seen an ocean or anything resembling one and we are off to Celestun.

Oddly enough this is the only photo from Merida, it's true. 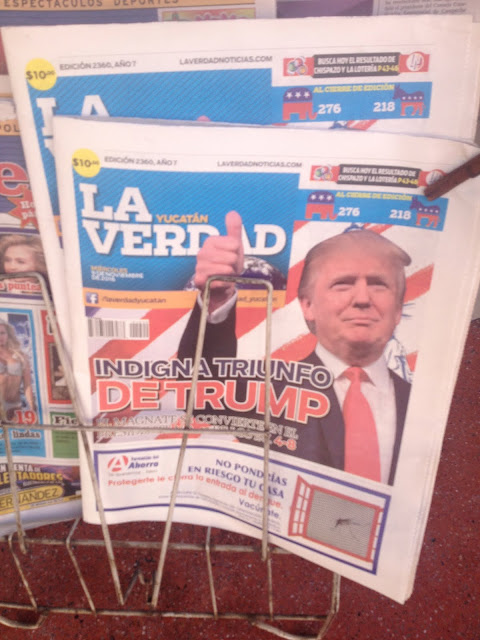